Nowadays, with the use of social media so prevalent, Bible Verses for Hunters is one of the most fascinating topics to discuss. People who share their hunting experiences online as well as their prey were quickly judged and even attacked.

Additionally, it’s a difficult issue that people usually avoid despite its intriguing nature.

Why? There are some people who oppose it and find it unacceptable since many are abusing their hunting rights. In contrast, others fully support it since it is their source of food and also their source of livelihood.

It’s this fear of judgment and being labeled as a bad person that keeps the majority quiet and out of the discussion between those two groups of people who have different opinions.

As for my two cents, I will honestly say that I am reluctant to commit to the practice. My area is more rural, and our local farmers raise their own livestock, which they harvest when necessary. When I was growing up, hunting for food was more common in rural areas. My view is that it is acceptable to do so if it is for food and for the livelihood of one’s family.

A man was given the authority to rule over all the animals that were here on earth, from the fish, to the birds and even the beasts, in Genesis. Additionally, there are written scriptures that indicate that God Himself ordained or permitted the sacrificial system, which involved the sacrifice of millions of sheep, goats, pigeons, and bulls. It is also stated in another scripture that God created the animals in order for them to be eaten by humans.

It is true that there are numerous written passages in the Bible that say hunting is acceptable and not a sin, but there are also some written passages that list limitations regarding hunting. It is not acceptable to kill games recklessly or indiscriminately, for instance. However, the Bible does not mention that killing animals is bad, just that it must be done responsibly. 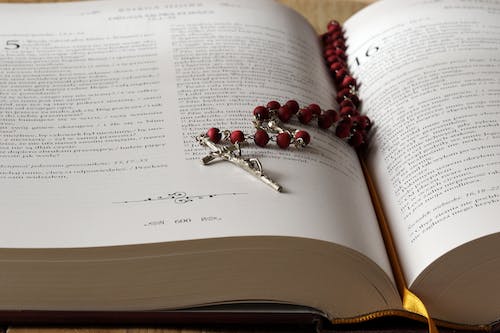 I want you to go out into the open country and hunt some wild game for me with your bow and quiver full of arrows.

What can you do to satisfy the appetite of the young lions? Will you be able to hunt prey for them?

Nevertheless, David told Saul, “Your servant used to take care of sheep for his father. I chased lions and bears and struck them when they took lambs from the flock, and I retrieved them from their mouths. I would catch him by his beard if he arose against me and strike him dead with my blade.

You will be unable to destroy these nations at once, lest the beasts of the field become too numerous for you, for the LORD your God will drive out those nations before you little by little.

In time, Esau became a skilled hunter, a man of the open country, while Jacob stayed at home among tents.

He walked among the lions; He became a young lion; He tore his prey to pieces; He devoured men.

Having been with God, the boy grew and settled in the wilderness to become an archer.

In light of these 10 Bible Verses for hunters, it is easy to conclude that the scripture is balanced in terms of how one should practice hunting. It was there that God instructed you to be skillful hunters so that you could support yourself.

The Bible outlines that you are also responsible for taking care of the animals as well, so you must remember that. According to the first book of the Bible, you are the ruler over all the land and all animal species, therefore, part of your responsibility is to safeguard these animals.

Additionally, you should keep in mind that God loves animals as much as He loves us, which is why people should refrain from hunting that can result in their elimination. It is our responsibility to make sure that what we hunt is merely excess and won’t wipe out a certain species from the planet.

Ultimately, hunting is not a bad thing if it’s done responsibly, so I’m glad I don’t have to worry about having a 50/50 opinion about it. My thoughts are very similar to yours, so you shouldn’t feel bad about them.

In the end, hunting is a good idea, but there are many restrictions to be aware of to prevent God’s creations from being harmed.

What is the First Communion? Christians Comprehensive Guide

The Complete Guide to Bible Journaling

The Best Way to Find a FREE Bible...

This first widget will style itself automatically to highlight your favorite product. Edit the styles in Customizer > Additional CSS.

@2021 - All Right Reserved. Designed and Developed by PenciDesign